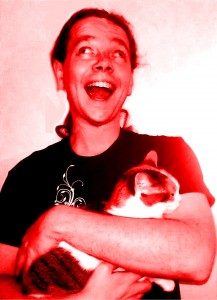 Experimental Voice Box Programmer may just be the most talented soul singer in Monowi, Nebraska. With influences as wide spread as Nina Simone, William Shatner, and GG Allin his vocal and musical style ranges from the pathetic and tragic to the funny and tense. Few artists have quite the same appeal to Gen Xers and the Silent Generation as Peter Frampton, except EVBP.

Born in 1997, EVBP grew up in the midwest where broadband internet didn’t exist until 2004. “By the time I discovered the awesomeness of Napster, it was a pay service!”

Lack of instant gratification via the internet could be considered a factor in the development of EVBP’s unique musical style. “The truth is, I just sucked at everything. I tried to be punk, but my long hair and love of Black Sabbath kept me from fitting the mold. I tried to be metal but I couldn’t play the guitar for shit. I tried to be goth, but my lack of things to be mopey about prevented that. Then I tried to do polka – musically I was successful, but I hated polka!”

So, like millions of frustrated square pegs before him, EVBP coined a new term for his god-awful noise: Jaded Rock. “I just wanted to come up with a new genre, so that media sources would have a buzz word to attach to my name. Because, let’s face it – Experimental Voice Box Programmer is a long name for a band!

Other jaded rockers exist – Knee Deep In The Funk Machine, Sonic, Cheesus H. Crust & the Pizza Pious Band, Nicky Sick’s Rectal All-Stars, etc. – and apparently they all view EVBP as a vital influence on their development and style. “[He] is the reason the funk machine doesn’t play funk music anymore!” proclaims Johnny Deep, lead vocalist and bassist for Knee Deep In The Funk Machine. While Louis Barlow (no relation to Sebadoh’s frontman) of the Rectal All-Stars admits “The first Rectal All-Stars record was influenced in equal part by the Sex Pistols and Experimental Voice Box Programmer.”

So is Jaded rock the next in a long line of trendy music genres like Grunge and Emo?

“Probably not. Jaded rock is basically a sub-genre of alternative rock which is a sub-genre of rock & roll and the basis of the genre is losers like me saying ‘Hey, I’m not doing this for your enjoyment. But please, pay me!'”

So several albums into a career that is going drastically wrong, Experimental Voice Box Programmer has released M.E.O.W. which stands for whatever you want it to. “It stands for the Mechanical Essence Of Whiskers. Which is a reference to an image of one of my cats with terminatoresque highlights. Hooray for Photoshop!”

It doesn’t really mean much in the grand scheme of things, but it still stands as the most ambitious album EVBP has released. “Lo-Fi Mouth” was basically an exercise in not throwing out ideas; “Throw-Down Syndrome” was the exact opposite. I threw out everything that didn’t work 100%. And “The X of Art” was my commercial record. Very little experimentation was done on that record.”

M.E.O.W.’s closest counterpart would be the debut album “Lo-Fi Mouth“, because of its wide variety of styles, sonic experimentation, and the extreme volume levels. “I tried just about everything with this record! Rap, death metal, chip-tune, acoustic pop, lo-fi punk… one of the songs even has a spanish guitar lead!

So will the release of M.E.O.W. result in a tour? “Oh absolutely! I’ll be playing my best friend’s birthday party, Howard’s Club H, The Blind Pig, and then I’ll be headlining the men’s room at McDonald’s on W. State St. in Ann Arbor. I might even do an acapella performance from my car on Eastbound I-94. Get your tickets early, because they’re pretty likely to sell out… or get lost in the clutter on my desk. Which ever comes first!”