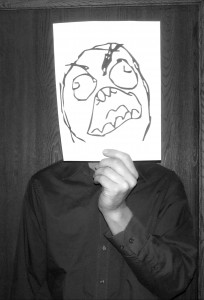 In 2003, the music world was completely unaffected by the birth of Experimental Voice Box Programmer. And why would it be? After all, countless young adults had picked up instruments and written songs as a means of self-expression. And plenty of gifted artists had crossed musical genres and given the middle finger to conventional song structure.

Today, its hard to imagine indie rock without EVBP’s influence. Artists as diverse as Animal Collective’s Brian Weitz and Dale Crover of the Melvins have cited EVBP as one of the most innovative song writers outside the Top 40. So what situation creates an artist of such unparalleled brilliance?

“I grew up in the midwest. I was raised on Rosenshontz, children’s chewable Tylenol and Nintendo. I developed nostalgia for things that weren’t even that old. And I discovered that this nostalgia was both a gateway to the future and an anchor to the past. I embraced esoteric subject matter for my songs while attempting to tie these topics to modern musical influences.” Jaded rock is the result it would seem.

“With jaded rock, it occured to me I could mashup elements of older music with modern subject matter and modern approaches. And vice versa!”

Lo-Fi Mouth was the result of this honing of craft. Noisy, trippy, abrupt, and almost totally random, the album careens off of musical genres like a NASCAR racer.

“I was drunk for about half of the recording process. The other half of the time I was suffering from a bad head cold.” Somehow this combination spawned what Pitchfork.com’s Marc Masters has called “A direct insult to the character of humanity” and at the same time “a brilliant intersection of the most horrific elements of kitsch-pop. MC Skat Kat meets Skatman John!”

Hot on the heels of this revolutionary album was the abysmal Throw-Down Syndrome EP. “It was originally supposed to be an album but I had to pull a song because it offended the VVA, and three more because of uncleared samples.” The tracks ‘Vietnam Never Happened’, ‘Seth McFarlane Has a Mole on His Scrotum’, ‘I Just Want a Furry to Love’, and ‘Fuck U All (But in the Nice Way)’ have never seen the light of day – and probably never will.

“There are only two copies of those songs. I own one and Geordie Walker of Killing Joke has the other. I think he’s using it to steady an uneven table leg.”

The rest of the EP is a hodge podge of bill collector’s answering machine messages, restroom loops, and heavy metal guitar solos. “I honestly regret all but two songs from that whole record – the one I recorded with my step-sister, and ‘Which Hand Fills Up Faster’. The rest of the record is just a reminder of the legal trouble I was going through with Axl Rose.”

Personal feelings aside, the record did receive a few favorable reviews. Robert Christgau hailed the record as “At least as good as the last one”, while Breakfast At Sulimay’s Ann Bailey proclaimed it “the most colorful coaster I’ve ever owned!” However the largely negative reviews took their toll on EVBP’s psyche, and what followed could only be described as a five year heroin binge.

“I basically fell apart. I couldn’t get out of bed. But then I found Scientology and now I’m all better.”

Following his indoctrination, EVBP released The X of Art EP. “I finally realized there is a fine line between being a relevant artist and being financially solvent!” The X of Art EP is a pop record – but with that trademark jaded rock twist. “I wrote a platonic love song about Lisa Simpson called ‘Lisa Simpson’ and an energetic, techno-punk song about Jolt Cola. I also wrote three other songs. They’re all on the record.”

Reviews of the album have been extremely favorable. “It’s not a return to form, and thats a good thing! 3 1/2 Stars” wrote Cameron Crowe. Not normally considered a music reviewer, Gordon Ramsey had this to say: “It’s f***ing brilliant! I love the song about chickens!”, and one reviewer stated “I liked it so much I actually paid for my copy!”

At present, EVBP is finishing up the mixing and mastering of his first full length record since Lo-Fi Mouth. The Mechanical Essence of Whiskers, or M.E.O.W. marries the experimentalism of Lo-Fi Mouth with the pop sensibilities of The X of Art. “I wanted to quit my day job so I wrote some more songs. Unfortunately, nobody buys CDs anymore so I still have my day job, and now I have some more songs!”

So what’s on the horizon for EVBP? “I might have a cameo in Darren Aronfsky’s next film. Beyond that, I think I might make another record. Who knows what to expect after that?”